So, here’s the thing… “You know you won’t make it if you take your problems and negative thoughts into 2017. 2016 was your year of lessons and preparation. 2017 is your year to put into practice every lesson you learned from your process. If they can’t grow with you, they can’t go with you. If they drain you, they can’t remain with you. If they don’t have the same mindset as you, they cannot be a part of your redo. If they can’t celebrate you, you can’t elevate them. You paid for your next level with last level lessons learned. It won’t be easy, you still have some work to do, but you must get ready. 2017 is for your destiny classes not history classes –– Patrick Weaver

It is with great sympathy and heartfelt pain that I acknowledge the agony the parents of the missing children must be experiencing. It is agony to know that your child is missing; but it is a greater pain to not know what they are experiencing. As one mother to another, you are in my prayers. I pray that your precious gift is returned to you unharmed. I pray that God heals you and holds you in His bosom and rocks you in the name of peace. I know words, regardless of how sincere they are, will never erase the pain. I know that the sleepless nights will not go away until you know your child is safe. But remember, God still answers knee-mail.


Thursday, February 23, 2017, at Morgan State University’s School of Business and Management, I was proud to participate in the signing of Northrop Grumman Corporation and Digit All City’s Partnership Under Defense Contracting Management Agency (DCMA’s) Mentor-Protégé Program. I was deeply honored when I was asked to speak at the event. 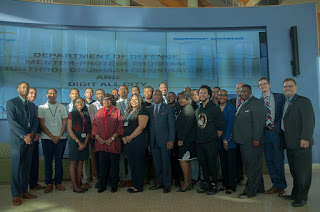 The Cyber Warrior Diversity Program with participation from Morgan State University and Coppin State University will provide cyber security training and certification testing in accordance with Department of Defense (DoD) 8570. DoD 8570 provides the basis for any enterprise-wide solution to train, qualify, and manage the DoD Information Assurance (IA) workforce. The primary goal of this program is to comply with DoD 8570 Information Assurance Workforce Improvement Program providing Cyber Security computer training and testing at HBCU’s. Students will be placed in internships and careers in the defense industry. I was excited to see employers on site at Morgan ready to hire some of the young students prior to them completing the program.

As some of you may know in the 2016 session of the Maryland General Assembly my bill HB 1401: Enoch Pratt Free Library - Hours of Operation passed. This bill ensured that three million dollars were put in general funds to support the increased Library operating expenses; requiring Baltimore City to provide a 25%  to support increased Library expenses. However, Governor Hogan withdrew the funding. Let your voices be heard to ask Governor Hogan to reinstate the funding.


Pratt is many things to the customers - safe and welcoming spaces, helpful staff, reliable materials, varied programs.  As a partner in education and lifelong learning, Pratt is providing Internet access, through Wi-Fi and on site computers that can be reserved  by students completing research as well as adults seeking employment related information and help.  As you know, for many of the customers, first learning how to open an e-mail account and research the Internet is a challenge - but librarians across the Pratt system are trained to assist in this primary step and then to assist with issues ranging from homework guidance to resume writing and job searches. STEM programs at Pratt enrich the learning and stimulate the curiosity of young students; Word processing classes help citizens prepare for re-entry to the job market or promotion in the workforce. Without Pratt, many do not have the computer access, the Internet, the materials, the quiet spaces or the skilled guidance to accomplish their goals.


Not only are extended hours important to young people, many adults also depend on the libraries being open at times when they can access the services after work hours. Some adults and young people use the library for their computer needs. Many do not have access to a computer in their homes, additional hours of operation are needed for adults and youth.

To show your support please contact my office via email or postal mail in favor of reinstating the funds. We appreciate your support.

Posted by Barbara A. Robinson at 8:48 AM No comments:

In the mid-1800’s, West Africa’s Kru tribe was known among slave traders and colonialists for their resistance to capture and enslavement. During the 1700’s they were vital in the trade between Europe and other nations due to their skillfulness  navigation of small ships in the choppy coastal waters.

The Kru settled in the region now known as Liberia and the Ivory Coast and in some portions of Sierra Leone, most notably Freetown.

They were infamous for fighting for their freedom,reducing their value to slave traders who found them too difficult to tame for slavery. If captured, the Kru would simply kill themselves, rather than become property.

In 1856, the Kru clashed with The Republic of Maryland, Liberia’s former name. The Grebo people, a subgroup within the Kru ethnic group, assisted in the resistance and their victory over the Maryland settlers became the stuff of legend.

Today, the Kru largely exist in the same areas as they did then, employing tribal hierarchy systems independent of one another. One of the most well-known Kru descendants is Ivorian soccer star Didier Drogba, the all-time top scorer for the Ivory Coast national team and a feared striker for his former team, Chelsea. Drogba helped his nation’s team qualify for its debut appearance in the 2006 World Cup event.

https://blackamericaweb.com/2017/02/01/little-known-black-history-fact-kru-people/
Posted by Barbara A. Robinson at 6:23 AM No comments:

A Successful Night in Annapolis

The 40th district team sponsored two buses to the event; one left Mondawmin Mall and one left from the Stieff Building. Additionally, a third bus sponsored by the Park Heights Renaissance, left from the Zeta Senior Center and a fourth bus filled with youth was sponsored by ConneXions: a Community Based Arts School.

We began the program with a prayer and asked God to intervene. Knowing that He fed the multitude of people with 2 fish and 5 loaves of bread, I felt comfortable knowing He would feed the people gathered peacefully to fellowship, network and be informed. Upon observance of the unusually large crowd I knew we were going to be okay. And He did not fail.

Although many more people attended than we anticipated, not only did we have enough food to feed those we had counted for but we had a considerable amount of leftovers; which we donated to a homeless shelter.


Thank all of you, because of you it was an evening well spent.
Posted by Barbara A. Robinson at 11:32 AM No comments:

"You know you won't make it if you take your problems and negative thoughts into 2017. 2016 was your year of lessons and preparation. 2017 is your year to put into practice every lesson you learned from your process. If they can't grow with you, they can't go with you. If they drain you, they can't remain with you. If they don't have the same mindset as you, they cannot be a part of your redo. If they can't celebrate you, you can't elevate them. You paid for your next level with last level's lessons learned. It won't be easy, you still have some work to do, but you must get ready, 2017 is for your destiny classes, not your history classes." -- Patrick Weaver
Posted by Barbara A. Robinson at 7:42 PM No comments: